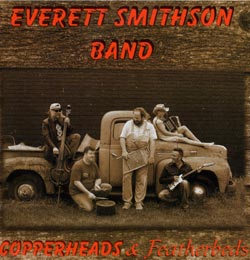 
Everett and Kathy Smithson and their band deliver a solid helping of blues and zydeco here which seems to travel all the way from one end of the Mississippi River to the other. Everett’s deep, husky vocals and low, heavy, muscular harp playing drive most of the songs, backed by Kathy on either rub board or accordion. On the zydeco of “Calling All Cows” Kathy gets a chance to show off her beautiful voice and squeezebox technique. She brings a little attitude and humor to both, nailing this solid cover. Everett’s singing and playing on “It’s Mighty Crazy” sets a retro, atmospheric tone on a great Otis Hicks cover. The versatile, tasteful tones of Phil Schmid’s guitar adds richness and depth to the songs. The solid, talented rhythm section of Jeremy Johnson on drums and Bill Black on bass provide the steady, strong foundation for the other players.

This is a mix of well chosen songs, great for listening or dancing. “Hurricane” finds Everett blowing his harp slow and soft, singing the same way, and bringing his vocals and harp up to a raging storm of great music. The bands plays very together here, all the musicians helping to create a sense of foreboding over the gathering storm and then letting loose with their playing to evoke the power of a hurricane. “Fat Man” seems to be Everett’s theme song. He shows his humor as well as his harp and vocals on this solid number. The CD ends with the energy and attitude of zydeco on “No Good for Me.” Kathy shows off vocal strengths here, giving the listener nice range, energy, rich vibrato, and plenty of passion. The veteran players move easily from traditional blues to New Orleans funk and zydeco. If you like traditional blues and zydeco featuring some great playing and singing on less familiar songs, this CD is for you.


Everett and Kathy Smithson brought their talented local blues group into Famous Dave’s for some great traditional blues and zydeco in support of their new CD, Copperheads and Featherbeds. The band jumped right into it with “Stop Breaking Down,” a John Lee Williamson song from their CD. Everett’s big, gritty, and muscular harp and low, husky, rasping vocals drove the song. Phil Schmid added his solid, stinging guitar with excellent tone to the mix. Kathy, Everett’s wife, then showed off her talents on accordion and vocals on “Something Wicked.” Phil added some great jangling guitar licks. Kathy’s pretty, smooth vocals, rich with vibrato, make a nice contrast to Everett’s deep, heavy voice.

The band cranked it up a notch on “Long Tall Sally.” Bassist Bill Black on his upright electric and Jeremy Johnson on drums provided the solid, driving rhythm while Kathy got down and gritty with her vocals on this up-tempo number. It always seem strange to see Jeremy behind the drum kit, where he does a great job, since he is such a talented guitarist. The highlight of the evening may have been their next number, “Hurricane.” Just like nature itself, the band started out slower and softer, Everett’s harp going from low and nuanced to hard, fast, and wildly expressive. His vocals were the same, starting out soft and low, barely a whisper, and rising to strong, clear and powerful. The band played great together here, drums, bass, guitar, and Kathy’s rub board all going from low and slow gradually rising to a powerful storm of music. The band gives this atmospheric, traditional song a great reading both live and on their CD.

Feeling in a New Orleans mood, the band came back with “Calling All Cows,” another zydeco song driven by Kathy’s solid accordion playing and beautiful vocals. Jeremy and Bill set a nice, funky groove while Phil provided tasty guitar riffs on the simple, catchy, repeating rhythm here. This song also graces the CD. The band closed out their first set with a tender little number about drinking, “Wine Headed Woman.” Everett’s great, husky vocals, where he seems to be channeling Howlin’ Wolfe at times, and his solid harp play, going from high and piercing to low, guttural and gritty, made for a nice exclamation point at the end of the set. This band provides a lot of energy and style in their playing, music that is great for listening, or even better, getting out on the dance floor where you can feel and move to their grooves.

This is a tight talented band that demonstrates once again how much great musical talent there is in the Twin Cities. Everett and Kathy lead the jam nearly every Sunday night at Inn Kahoots in Hamel. Bill plays with the Senders, and elsewhere with other groups who need a versatile, veteran bassist. Jeremy and Phil make up Big George Jackson’s great two-guitar attack. Be sure to check them out either together or with the other groups they play with when you get a chance.


Everett sounds like he is channeling Howlin Wolf himself and is a talented harp player. Kathleen has clear expressive vocals with an innocent quality she uses to good effect.~~Rich Benson-June 03

They specialize in quick uptempo tunes with a solid uncomplicated back beat and were often in our tempo wheelhouse!~~Allen Hall "Lindy Junky"-June 05